Finikounda is located at the southwestern endpoint of Messinia, between the villages of Methoni and Koroni. It has a population of approximately 600 inhabitants and appertains to the new Municipality of Pylos-Nestoros. It is a beautiful location, with a great seaside front and many sandy beaches, in particular. The earliest reference to the area of ​​Finikounda is found on clay tablets of Mycenaean Pylos, which were discovered in the palace of Nestor. Today, Finikounda has evolved into a remarkable touristic resort. It has a large number of lodgings, shops, restaurants and cafes. 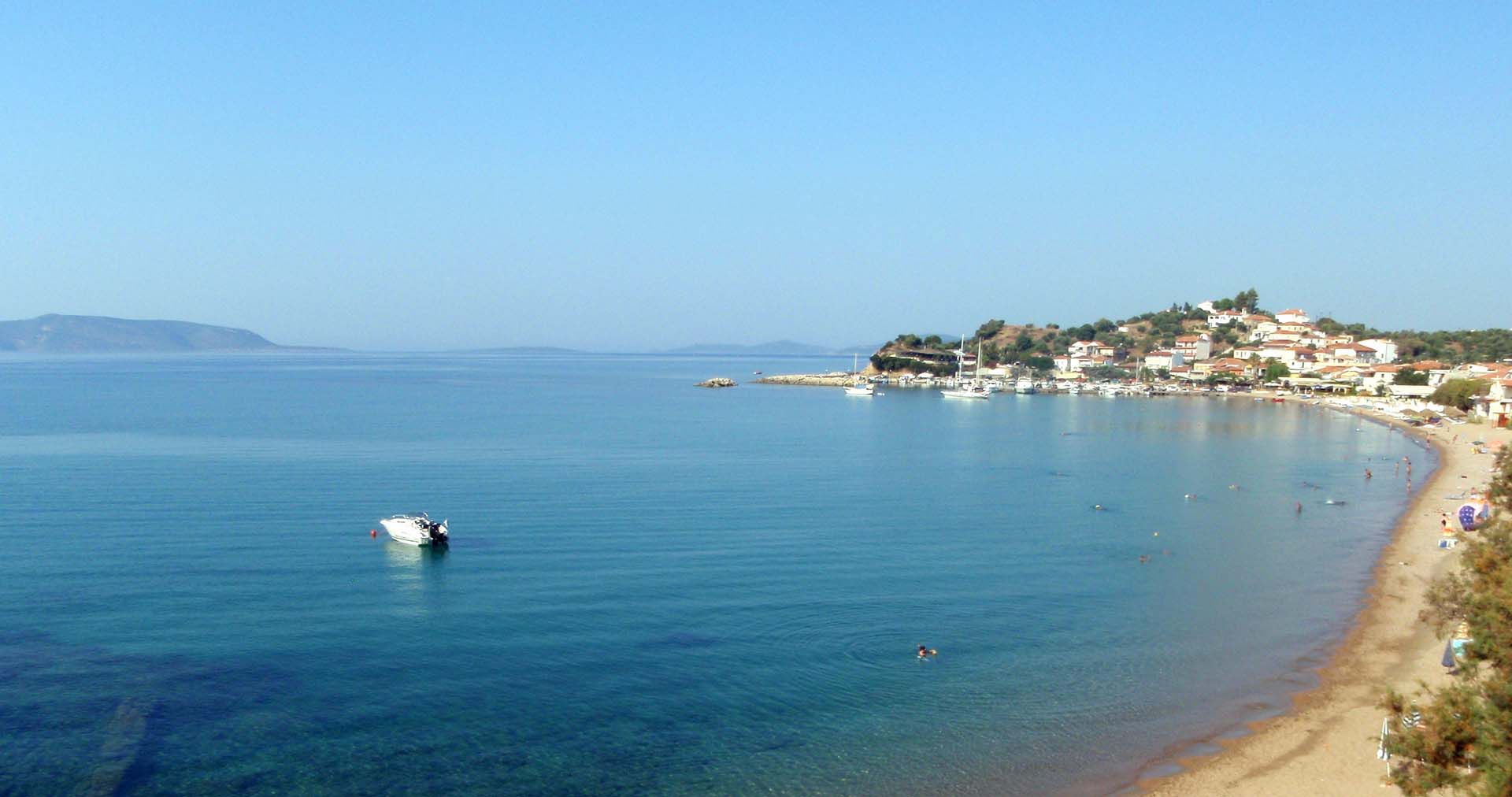 Finikounda Beach: It is a huge sandy beach with crystal clear water that attracts many visitors. Above the beach you will find a plethora of cafes and taverns.

Ligonammos: It is located on the east side of Finikounda, in a very picturesque bay in the shadow of the hill that stands out from the center of the seaside settlement. The Ligonammos beach is sandy, with few pebbles spreading in places and crystal clear water. It is rather well-known to families, since its water is not dangerous because of its even deepening.

Anemomilos or Makrynammos Beach: Next to Finikounda there is a wonderful sandy beach, called Anemomilos, which attracts many visitors. It is actually a part of the huge beach that is sprawled for over 8 km, which is organized as well. You can also find it under the name of Thines or Mavrovouni.

Lambes Beach: On the road from Finikounda to Methoni we will meet two wonderful beaches. The first is called Lambes Phoinikis. It is a busy beach, sandy with crystal clear water. The second is Lambes Methonis that has pebbles. It is a deserted beach, suitable for those who wish to enjoy their bathing quietly.

Loutsa &Tsapi Beaches: After Finikounda there are two beautiful sandy beaches, Loutsa and Tsapi, where you can swim in their crystal clear water.

Kantouni: Kantouni beach is located east of Loutsa, just before Finikounda. It is among the deserted beaches of the area, with difficult access. For this reason, you can enjoy a small voyage by boat that perfoms the same routes. It is a small cove, with sand, in a beautiful area, surrounded by rocks that literally hang on its sides.

Marathi: These two beaches, the small and the big Marathi, are truly beautiful and isolated from prying eyes. The beaches are accessible from the main road after Finikounda. Visitors will have to follow the route to Tsapi Beach (there is a sign on the road to Koroni) and then they will find themselves at a crossroad where they 'll have to follow the dirt road to the beaches. Marathi is accessible by boat from Finikounda, as well. It is good to make sure you have the necessary supplies, such as water and food, with you.

Methoni: Methoni is located at the southwestern endpoint of the prefecture of Messinia, 61 km away from the city of Kalamata. Methoni is a beautiful seaside town with unique sights. During summer months it attracts a lot of visitors. According to Pausanias the first name of the city was Pidassos. Homer reports it as one of the seven cities that Agamemnon had promised to Achilles during the Trojan War.

Koroni: It is a picturesque coastal town in the Prefecture of Messinia, built amphitheatrically upon a low hill. It counts about 2,000 inhabitants and is 20 km away from the city of Kalamata.
According to an ancient folk tradition, Koroni was named after the copper coin “Kurouna”, which was found in the area during excavations. Koroni is identified with the Homeric Aepia, one of the cities that Agamemnon had promised to Achilles during the Trojan War.

Pylos: Pylos is a small picturesque seaside town, located in the southwestern part of the prefecture of Messinia. It is 20 km away from Finikounda and has about 2,500 inhabitants. Pylos is the largest natural harbor of the Peloponnese and at the same time one of the most interesting touristic destinations of Messinia, thanks to its glorious history and its rich natural beauty of the area.

Inousses island chain: A visit to the Messinian Inousses is a special experience. It is a wonderful island group that consists three small picturesque islets: Sapientza, Schiza and Agia Marina. These islands are distinguished for their rare natural environment and exotic beauty. Wild species of birds and animals, such as wild partridges, pheasants and kri kri wildgoats, are hosted in the lush vegetation.

Sapientza is the most beautiful island of the chain. You can access this island, only you have your own boat, as there are no routes. In the northern part of the island, right across Methoni, there is a wonderful sandy beach, Ammos. The island is an important natural reserve and has been included in the NATURA 2000 program. Sapientza has a safe harbor, Porto Lóggo, and is suitable for excursions. Here you will see an impressive lighthouse, which can be reached by going up 75 stone steps. The stunning view from the island and the surrounding area will truly enchant you. At the northern end of Sapientza, at Cape Karsi, there are important findings of wrecks where diving enthusiasts will have unique experiences.

Schiza is the largest island of Inousses. It is worth visiting the wonderful cave, which has archaeological, geological and touristic interest. It is adorned by impressive stalactites and stalagmites, while prehistoric shells have been identified, as well.

The small island of Agia Marina is characterized by dense bushy vegetation and took its name from a picturesque chapel that is built there and celebrates on July 17th.

The Venetian Castle in Koroni dominates imposingly on a low hill and is the first thing the visitor faces when arriving in the city. The Castle was built in the 13th century and is a typical example of the Venetian fortress architecture. In the 16th century, the Turks strengthened its fortification. In the interior of the Castle, there are settlements and ecclesiastical temples. It is worth watching the fortification technique of the castle while the view it offers is unique.

The castle of Methoni is one of the largest in the Mediterranean and is built upon ancient walls. This imposing castle, built in the 13th century by the Venetians, occupies the entire area of the cape of the Southwest Coast. Throughout the centuries, many peoples, such as the Franks, Venetians and Ottomans, have tried to conquer it because of its position. The castle has an area of 93 acres and include two parts. In the southern part, there is the city, which is enclosed by a wall with towers. The northern part is particularly fortified as it was the headquarters of the military commander at times of old.

There are many historical and natural attractions in Pylos. Among them, Palaiokastro, Niokastro, the cave of Nestor, the Gialova lagoon, the Voidokilia area and others. In addition, the magnificent ancient plane trees that dominate the Three Admirals Square, in the center of the city, combined with the breath-taking view of the island of Sfaktiria, create a special idyllic atmosphere.

Voidokilia beach is undoubtedly the most popular beach of the entire prefecture of Messinia. It is a sandy beach that forms an almost round bay and its water is crystal clear. Due to the fact that Voidokilia bay is considered an archaeological site, the area is not altered by touristic infrastructure. Although the beach of Voidokilia gets many visitors, it is so beautiful and calm, almost ideal. The most "adventurous" visitors can visit the cave of Nestor and Palaiokastro from the end of the beach and enjoy the magnificent view.

At Chora, on the hill of Eglianos, there is the Palace of Nestor. It is the most well-preserved Mycenaean palace and differs from the rest in that it is not surrounded by cyclopean walls. The site's buildings include official apartments, wine warehouses, sideboards and workshops. The large rectangular "throne room" stands out, along with the circular hearth, the bathroom with the clay bathtub, and the warehouses with numerous storage vases. The palace was a two storey building and was decorated with colorful wall paintings. It was destroyed by fire in the late 13th century BC. From the Palace you can enjoy a splendid view of Navarino Bay and the Voidocilia lagoon.

Ancient Messini is 22 km away from Messini. It is one of the most important and well preserved cities of ancient Greece. The visitor can explore a whole ancient city, which has been remarkably preserved over time.

Ancient Olympia, the birthplace of the Olympic Games, is one of the well-known destinations in Greece and abroad due to its international renowned archaeological site. In the sacred grove of Altea, which occupies the central part and is separated from the surrounding area by an enclosure, there is the core of the sanctuary, the temples (with the temple of Zeus being one of the most important buildings), the treasures and the most important buildings.

Polylimnio is a complex of lakes and waterfalls in the heart of the Peloponnese. An exceptionally beautiful landscape of natural environment can be described as an "Aquatic hidden paradise of Messinia". It is about 40 km away from Finikounda.

Finikounda is 63 km away from Kalamata.

From Athens you can reach Finikounda if you follow National Road Athens-Corinth-Tripoli, and then follow the Tripoli-Megalopoli-Kalamata route. Since you 've reached Kalamata, you shall follow the signs to Finikounda. The distance is 312 km.

From Patra you can reach Finikounda if you follow the National Road Patras-Corinth-Tripoli, and then follow the Tripoli-Megalopolis-Kalamata route. Sincw you 've reached Kalamata, follow the signs to Finikounda. The distance is 358 km.

KTEL buses from Athens, Patras and Thessaloniki to Kalamata daily. There are also regular train connections from Athens and Patras to Kalamata. You can also reach Kalamata by air from Athens El. Venizelos. Also, the prefecture is connected by ferry with Kythera and Kissamos of Chania. 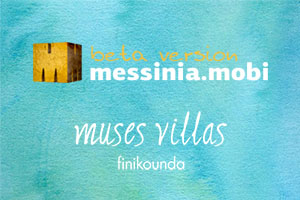